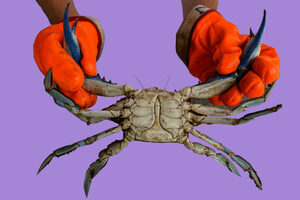 It’s not summer in Maryland until you’re tearing into a pile of steamed crabs crusted in Chesapeake Bay seasoning. Known for their delicate and subtly sweet flavor, blue crabs are a perennial icon of Washington region seafood culture. But, for the last few summers, they’ve been more costly than ever before. Low harvests, escalating supply costs, and intense labor shortages help explain why.

Although blue crabs are most associated with the Chesapeake Bay, they can be found in estuary habitats as far north as Nova Scotia and as far south as Argentina and Uruguay. They’ve even invaded Mediterranean waters, preying on local eels. Here in the Washington region, blue crabs are predators to decaying fish and smaller crustaceans, as well as prey to animals like blue herons and Atlantic croaker. Their role makes them integral to the bay’s ecosystem.